Home Blog Living in a Cabin in the Woods: A Winter Adventure 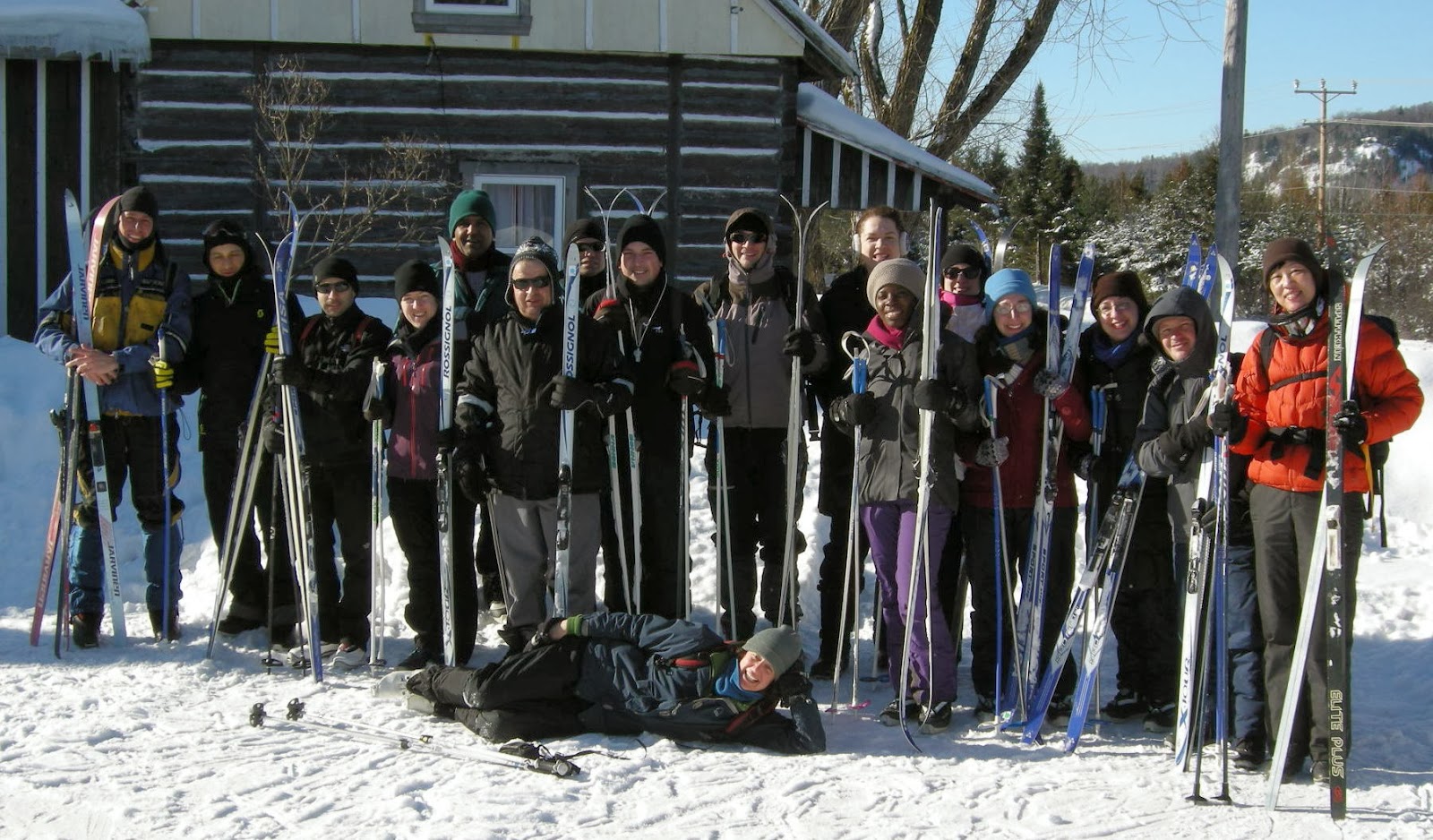 By: Randy Pinsky
What happens when you put a bunch of city folk in a cabin in the woods, with an itinerary of intense hiking, snowshoeing, skiing, and a little bit of campfire fun?… An absolute adventure 🙂
This past weekend, eighteen lucky individuals (sounds like an ad for Lotto Quebec, no?), spent a glorious winter camping weekend in the wilds of Arundel, in the Laurentians (north of Montreal). Led by our fearless and dynamic leader Adrienne, we had a magical time living, eating and cooking communally, and spending all day outdoors.
From gossiping with roommates while cuddled under blankets and munching potato chips, to swapping horror stories of snoring (that added… an ‘ambiance’?) ;p, each day was packed with fun and exciting things to do. Adrienne, coordinator extraordinaire, not only had all the collective cooking and meal preparation organized to such an extent that she also remembered mayo and mustard, but she even specially ordered in snow for us on Saturday. I tell you, ain’t nothing beyond her capabilities ;p
Trouping in the woods, snowshoes securely fastened to our feet (Florence made sure those babies were not going to fall off), we explored the woods and cabane à sucre. We searched for animal tracks and found evidence of deer, squirrels, foxes, and perhaps even an owl or two (one of our members was so enamored with the idea of deer, he inadvertently brought a little, uh, ‘reminder’ with him back to camp. Charming ;p).
Buckwheat pancakes with home-made maple syrup (with a bit of rum… for ‘flavor’), massive sandwiches, tons of fruit, veggies, fajitas, hot lentil soup (with a kick!) and even home-made pineapple upside-down cake! We sure didn’t do without (but we worked it off with three hours of snowshoeing followed by a leisurely four hours of skiing in the afternoon, so that balanced things out). Sure we had challenges-  searching for toilet paper was quite the adventure, the tiny shower with the ultra-narrow bench challenged even the more adventurous of us, but hey! That’s camping! And I wouldn’t change it for anything (….well… I might have asked for a Little more toilet paper… ;p).
Skiing was a challenge for those with little experience and even less balance, but Adrienne masterfully coached us all, leading us over vast open spaces, through evergreen tree nurseries, and across majestic mountains (well, sort of). Her alter-ego (husband) Fred, calm and quiet to her spunky and dynamic, made an excellent complement as a co-leader, and took care of the more adventurous skiers. The sense of camaraderie in helping one another pick themselves up from falling for the umpteenth time (apparently, a cabin mate filmed some of our less than coordinated descents- ok Marc- how much ya want for that film?), made it just incredible connecting with the outdoors. Such an important break from the rushed rat-race of running to meetings and appointments, to just spend some quality time outdoors!  Just the stillness and openness of everything was awe-inspiring- it was so quiet, you could even hear yourself breath, and, importantly in our over-booked, over-rushed, and over-saturated lives, just to think. Everyone experienced such a magical connection with the woods, leaving us all refreshed and re-energized.
From an assortment of people united by a love of the outdoors, we quickly became a close-knit group of friends (if you can’t get close to others when living within three inches of personal space, and all cooking and cleaning on top of one another…). And it is arguably, the special group of individuals who really made the retreat so much more memorable and special. Far from the superficial surface-level talking of networking events and business meetings, our discussions were authentic. Speaking to ‘real’ people who were genuinely interested in you and what you thought more than what you ‘do’ for a living and how much you make really put a spin on what we value in life. Having authentic conversations with fast created friends, made cooking, eating and cleaning up together such a blast (“hey Ma, when have you ever hear me say I loved washing dishes?” ;p). We all left knowing we had a special connection with one another, and all look forward to keeping in touch.
The evening walk on Saturday was so special, re-energizing, even spiritual. The complete and utter silence, dark dark sky, sparkling stars- so still and just well, ‘magical’. Walking in the night air, led only by the light of the full moon, the clear, crisp air of trees rustling under frostings of snow, and the warmth of being with new friends made this walk one of the highlights of weekend. Perhaps this specialness can be best described by a little guest we found in our cabin room – a ladybug. How could a ladybug survive in the cabin in the middle of winter? No one knows. But the magic it brought was a symbol for the entire weekend; the special bonding; the communing with nature.
We ended the evening with a campfire (what was hilarious was attempting to teach our non-Canadian friends about s’mores- somehow the effect wasn’t quite there as the toasted marshmallows solidified almost immediately after being removed from the flame!). Our friends good-naturedly munched on the (solid) marshmallows and (hard vs. melted) chocolate, politely wondering why any Canadian could be crazy enough to enjoy this ;p).
Thank you Adrienne and Fred for being such exceptional leaders. We all absolutely loved our winter adventure, and (once you’ve had some time- but not too long! ;p), can’t wait for the next one!
(Thank YOU Randy for supplying this amazing blog article, to Marian for editing, to all of our photographers and participants!!)