Home Blog Adventures in a Cabin in the Woods 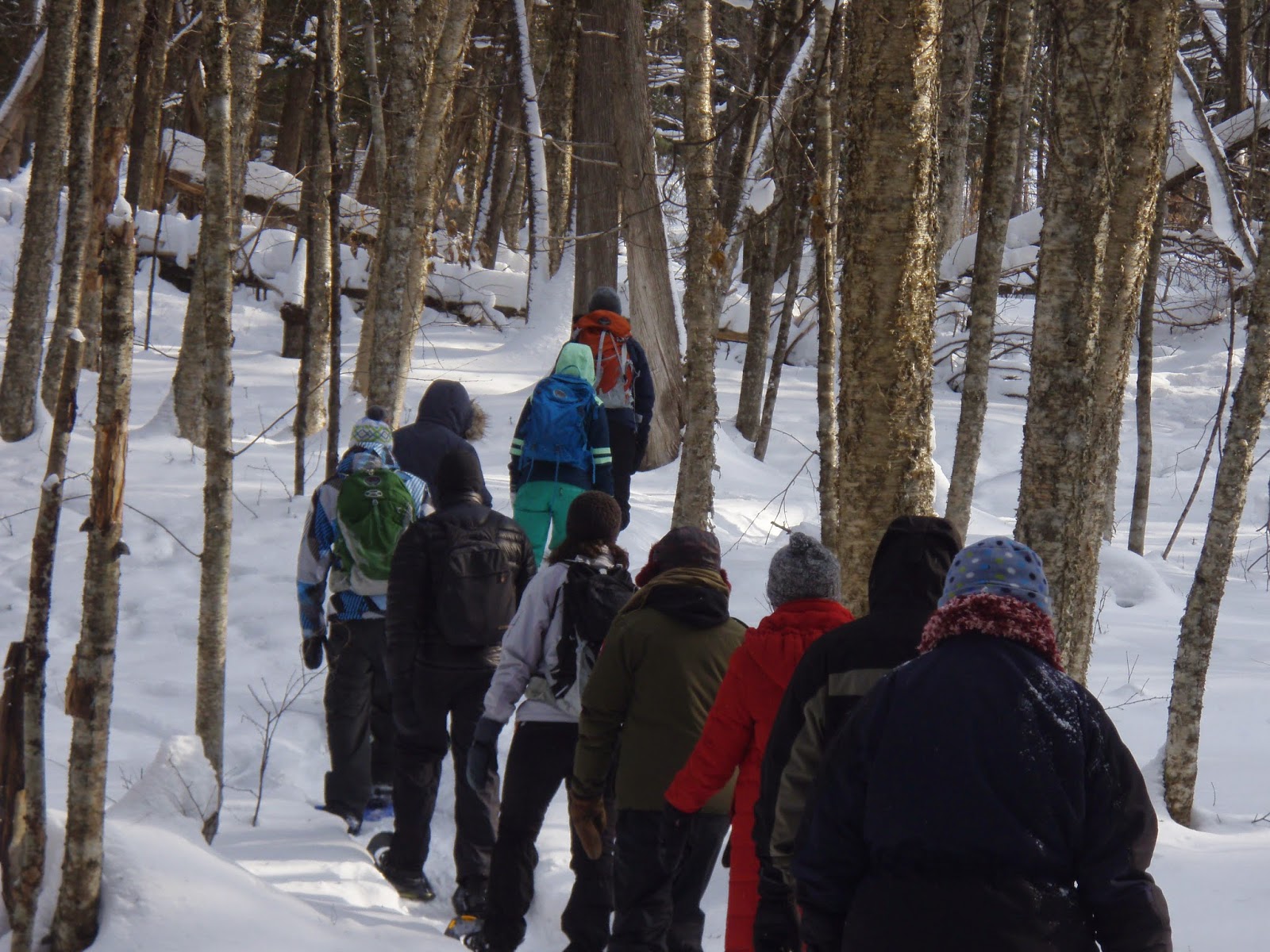 Text and photos by Randy Pinsky. Thanks!

What’s the best way of dealing with Montreal’s frigid winters? Gloomily watch the snowflakes as they lazily drift by your window, as you dream of warm sunshine and breezes? Get a massive bag of Orville Redenbacher’s Sweet and Salty popcorn as you systematically Netflix your way through all of ‘Modern Family’ and then ‘Big Bang’ episodes? Or… (dare I suggest it)- stay in a cabin in the woods where adventures are continuous and incredible memories are made with other outdoor seekers, for a weekend of snowshoeing, skiing, and tons of food? What would you choose? (never mind, don’t really want to know…)
That’s right all you wimpy folks holing under blankets with your not-so-waterproof Ugg© boots- twenty crazy lovers of the outdoors braved the wind and weather and spent an incredibly special weekend in the wilds of the Laurentians. A rustic farmhouse (with indoor plumbing though wouldn’t it have been cool if we had had to melt snow to…naw better not give Adrienne any ideas), we lived all together and slept in bunkbeds- a cabin near heavy forest, we cooked all our meals in a communal kitchen- you would not believethe size of the cooking pots, and the genuine metal skillets challenged even the most skilled of pancake flippers! 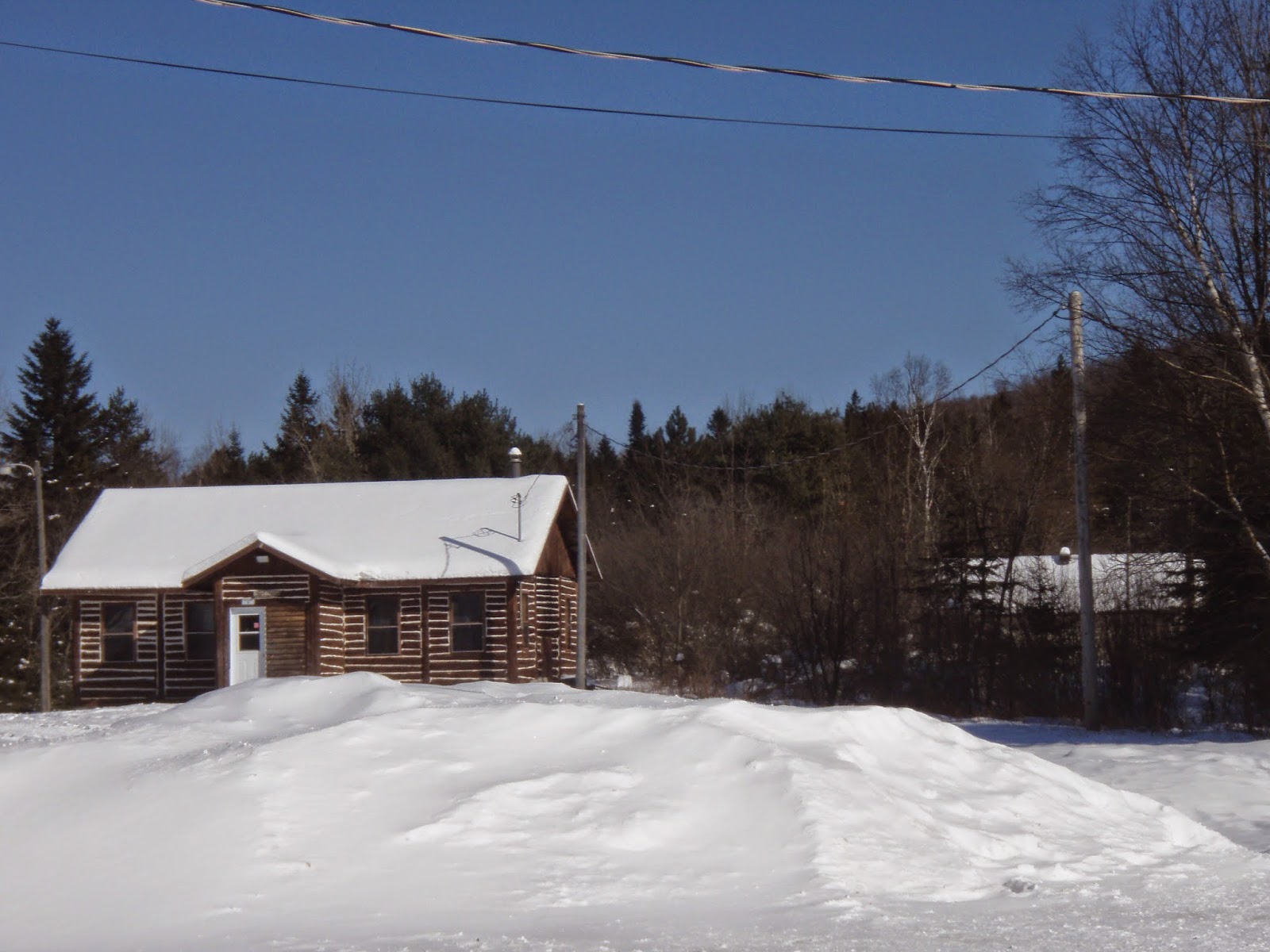 Our fearless leader Adrienne arranged everything from who was in charge of meals and carpools, to the beautiful snowfall that greeted us for skiing on Saturday and the incredibly clear night for our midnight hike, but even she did not foresee an unanticipated tire blowout. Though I have no doubt she could have changed it single-handedly, her dynamic car team pooled their resources and soon we were all together for our first communal meal. An eclectic mix of nationalities and languages, we were all united by our love of nature and connection with the outdoors over often superficial and stuffy urban life. A thrilling weekend of adventure was planned for us, and we couldn’t stop exclaiming over the amazing stillness of the woods, the natural beauty of the sun glinting through the snow-covered trees, and simply the genuine, untampered and non-complex nature of it all… 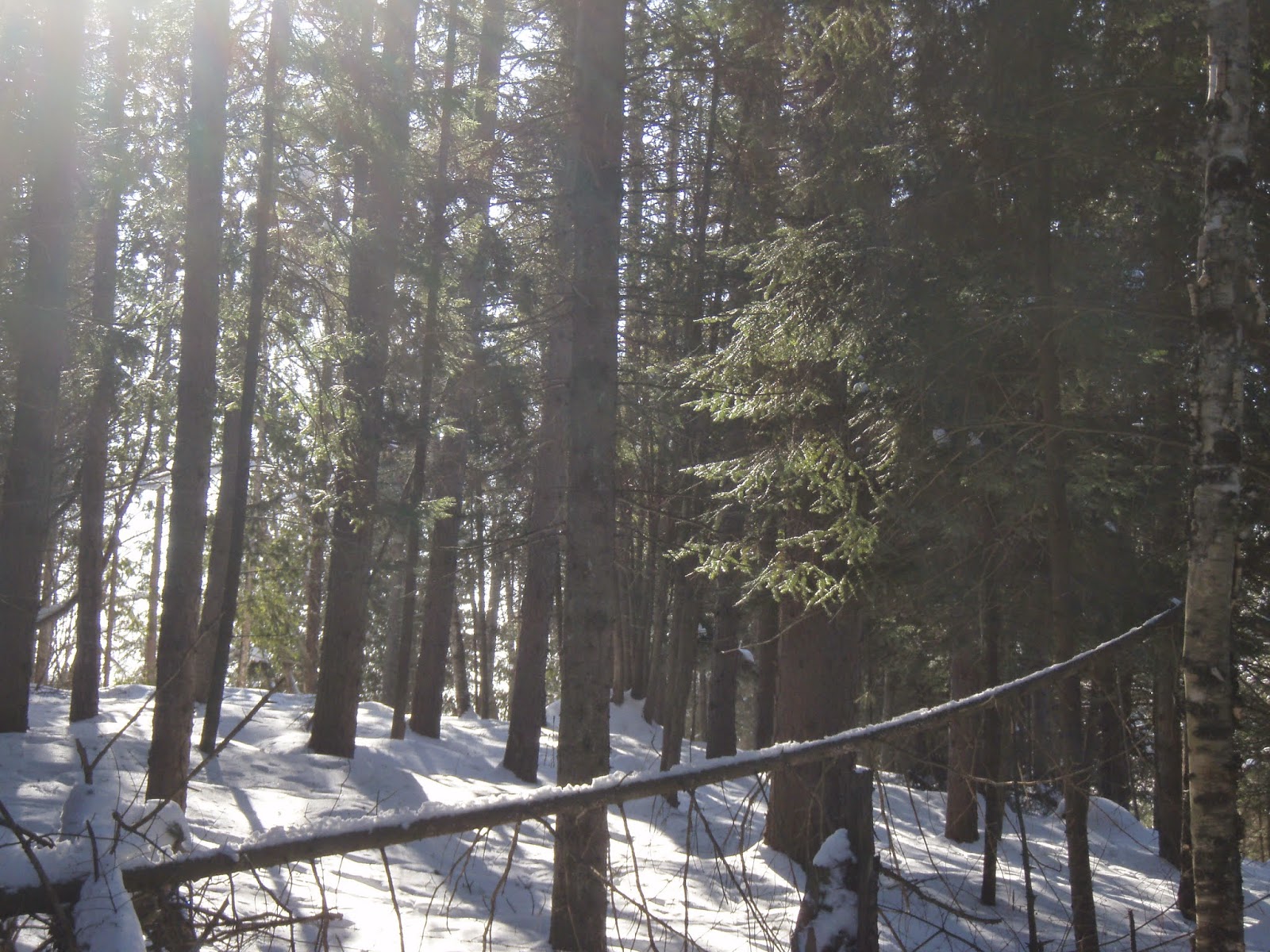 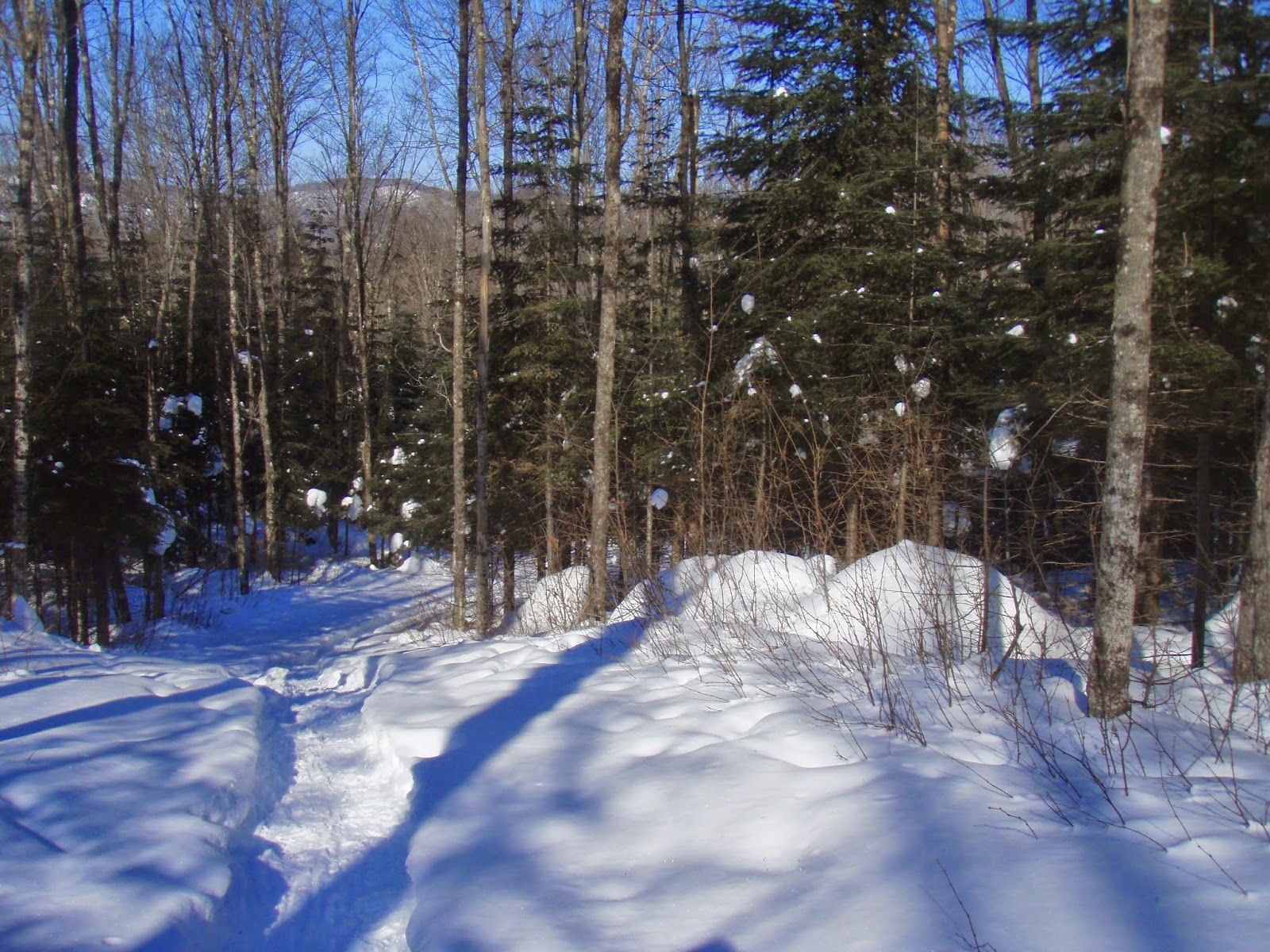 Now even the most flexible of people would have to admit communal living takes a bit of uh, time to get used to- was the first night ever a trial with an extremely loud and explosive toilet nearby, the very immodest showering facilities (not for the faint of heart but hey- that’s camping!) and the not-so-gentle whistling of our teammates- a restful first night it was not. But what an awesome experience to sleep in a bunk bed! (that is, for those of us who weren’t forced to do so with younger siblings growing up)
Bright and early Saturday morning, we were gently roused awake by Adrienne cheerily calling everyone to breakfast and receiving groans and tossed pillows in return (naw, we’re (a bit) more matoor than that- but if she had tried out her rooster imitation she allegedly prides herself with, it might have been a different story…). 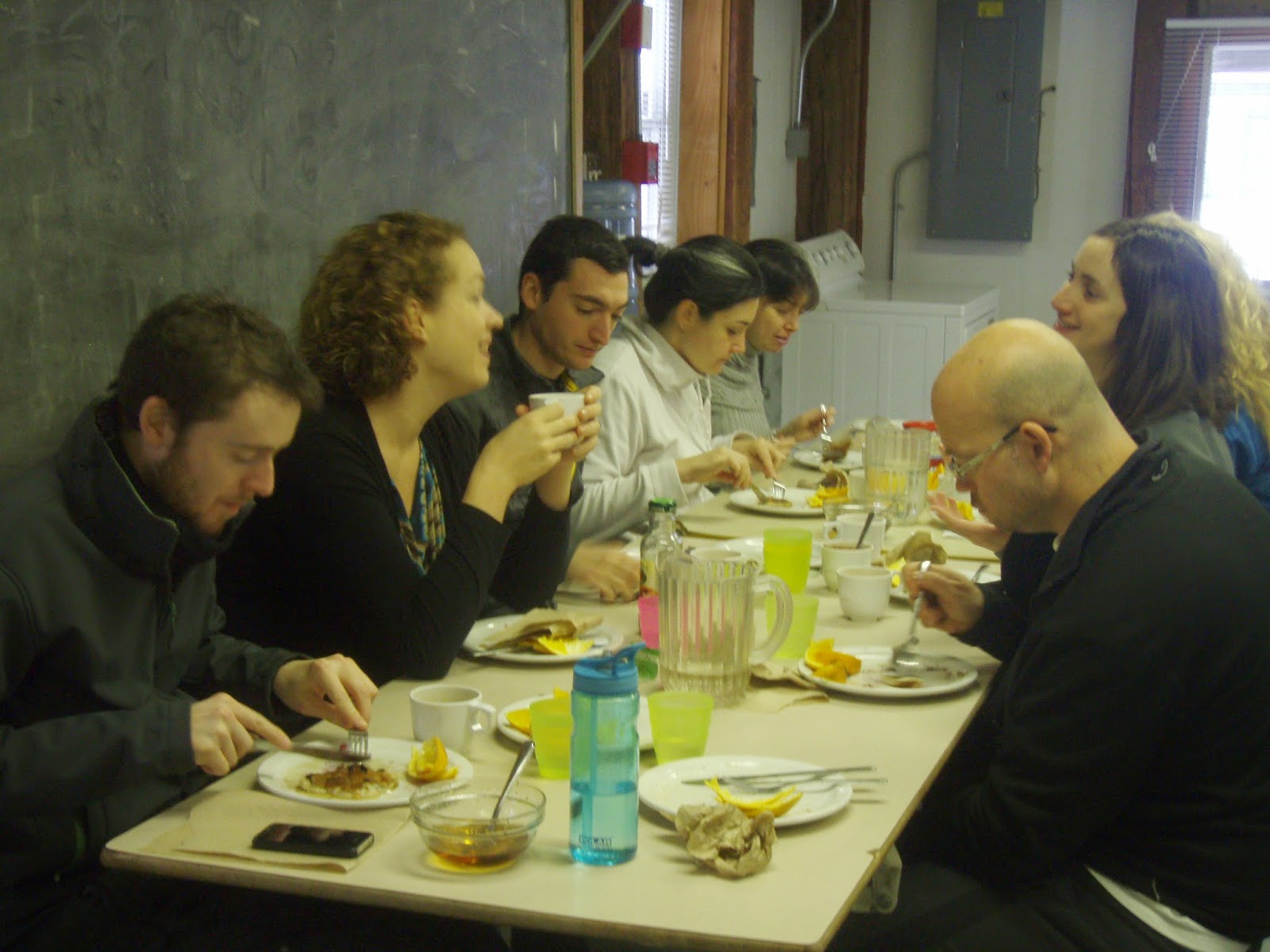 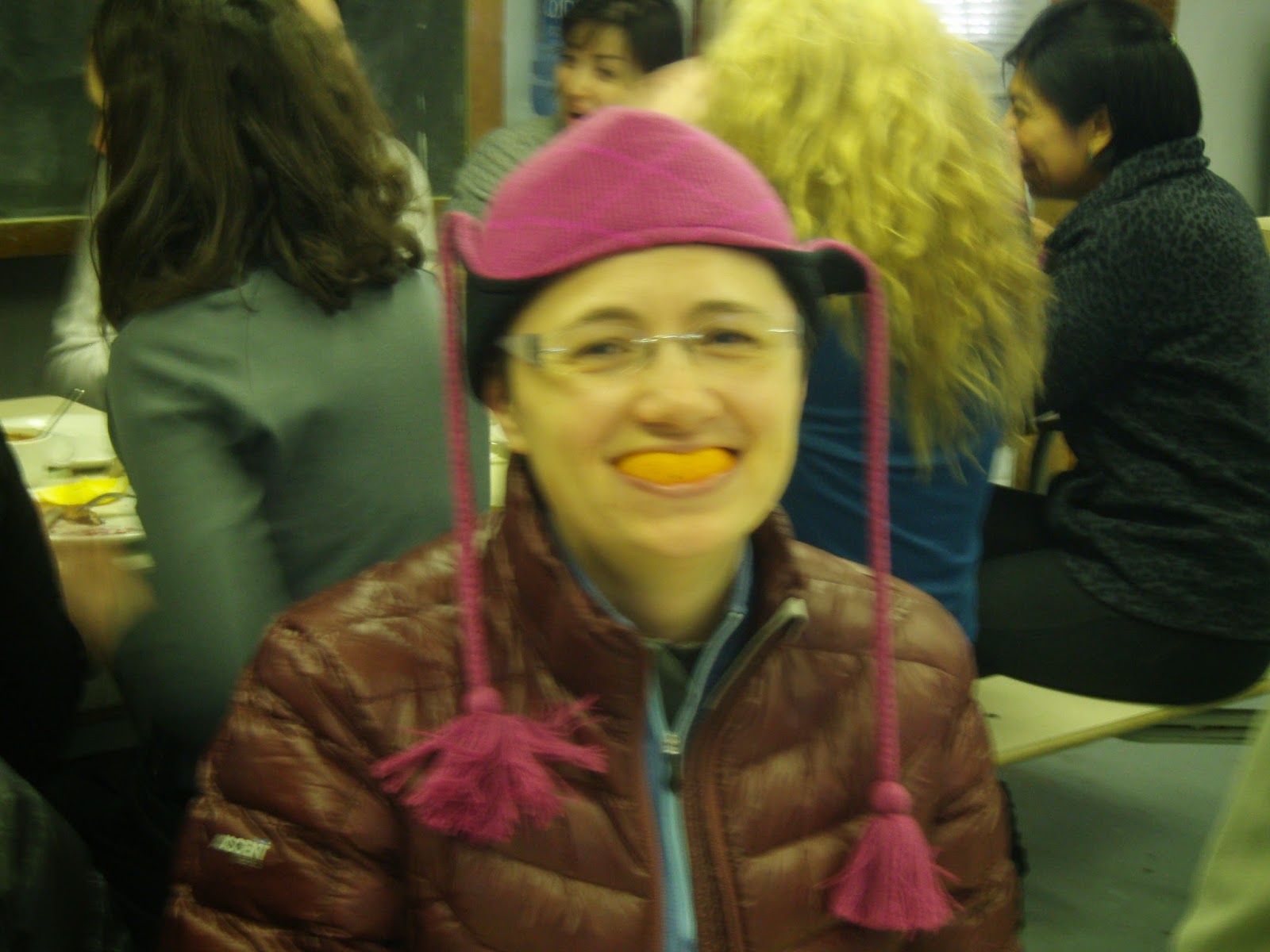 Beautiful bright and open skies, the cabins were even prettier in the day than they had been in the dark of the night. A feast of whole-wheat berry pancakes and cut up oranges greeted us, and we fueled up for an incredibly charged day. One of the best parts of living with a group is the otherwise seemingly mundane activities of communal cooking and cleaning suddenly became fun challenges. Imagine preparing meals for a bunch of starving hikers- that’s a lot of chopping to do! And soaping and rinsing over 75 plates, cups, saucers and miscellaneous cutlery would test anyone, particularly when it became abundantly clear that we had radically differing conceptions of what constituted ‘clean’… 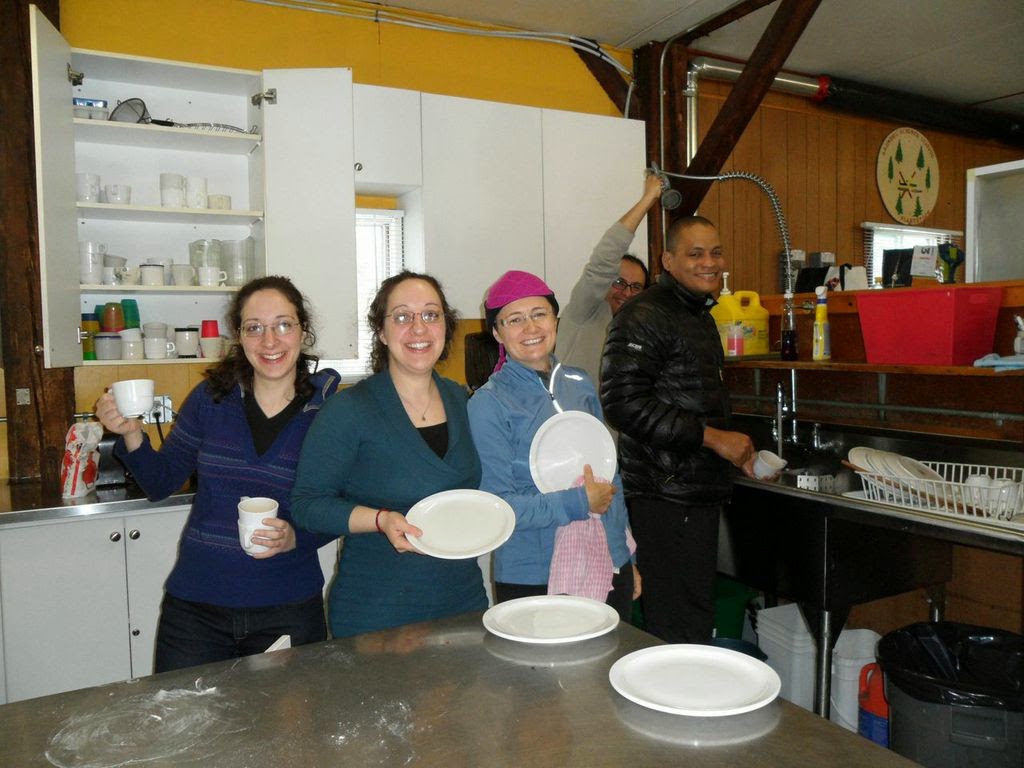 And then off to a grueling snowshoeing hike in the forest! Sir Hillary of Mount Everest fame would have been proud- what a challenging trek, but so incredible with so much to see around us. What a workout, but snowshoes are really such an incredibly special way of exploring a forest as you can access where you would have otherwise sunk in the deep and fluffy snow (‘fluffy’ being a word our French friends immediately fell in love with- there apparently is no French equivalent to it ;)). 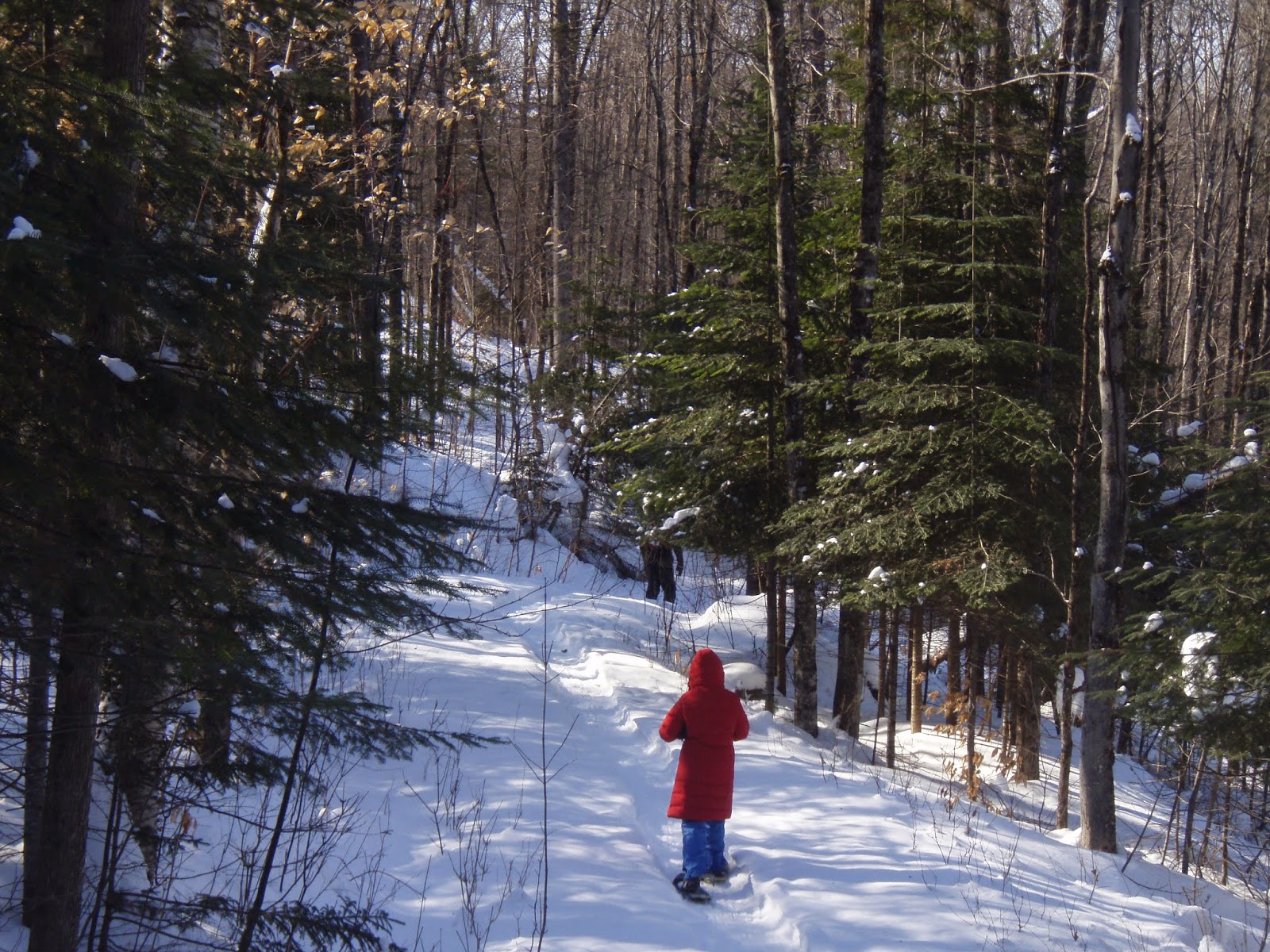 No matter how challenging the route was, Adrienne never missed an opportunity to point out how a spruce tree branch was different from the virtually identical cedar. Another highlight was when Fred heroically demonstrated to our international visitors how squirrels jumped, and inadvertently did so on an unseen hill, turning a simple hop into an elaborate summersault- what a good sport! 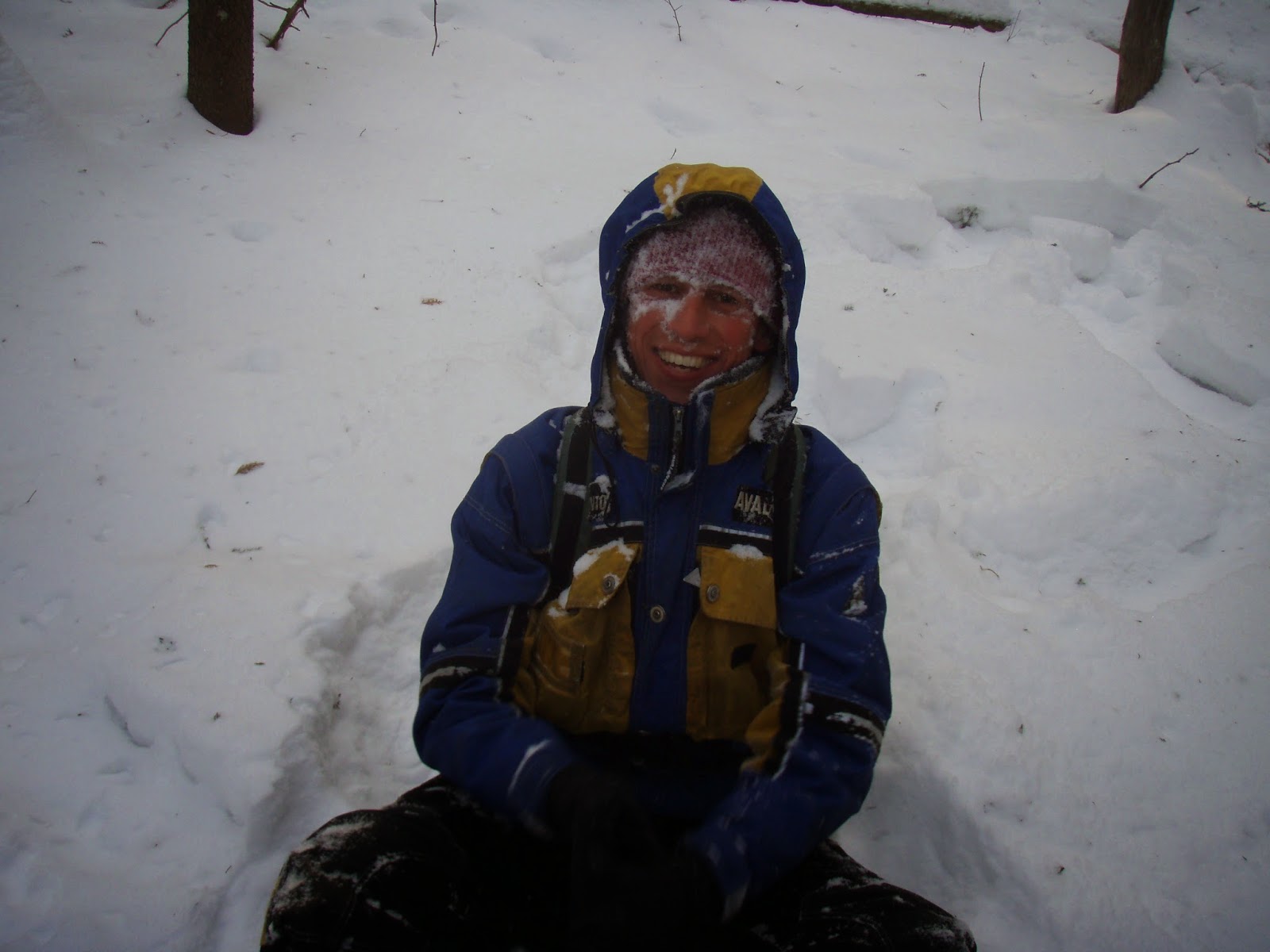 After a really intense snowshoeing hike, we headed back to our cabins for a bit of rest before starting the preparations for a hearty lunch with tons of hot soup, massive sandwiches, and home-made granola bars. And then off for an afternoon of skiing and exploring! What an incredible place Arundel is; massive towering mountains off in a distance, wide expansive areas to hike in mixed with narrow routes surrounded by trees all around- really magical. Even the least coordinated skiers fell in love with the sport. For the beginners among us, there was nothing more thrilling than facing a massive hill (probably just an imperceptible bump for the more experienced, but…), gearing up, and staying upright, letting out a triumphant yell of “who da man?! I da man” at the bottom. In addition to being incredible people, Adrienne and Fred just happen to also be expert skiing coaches (I know; it sickens you huh?) 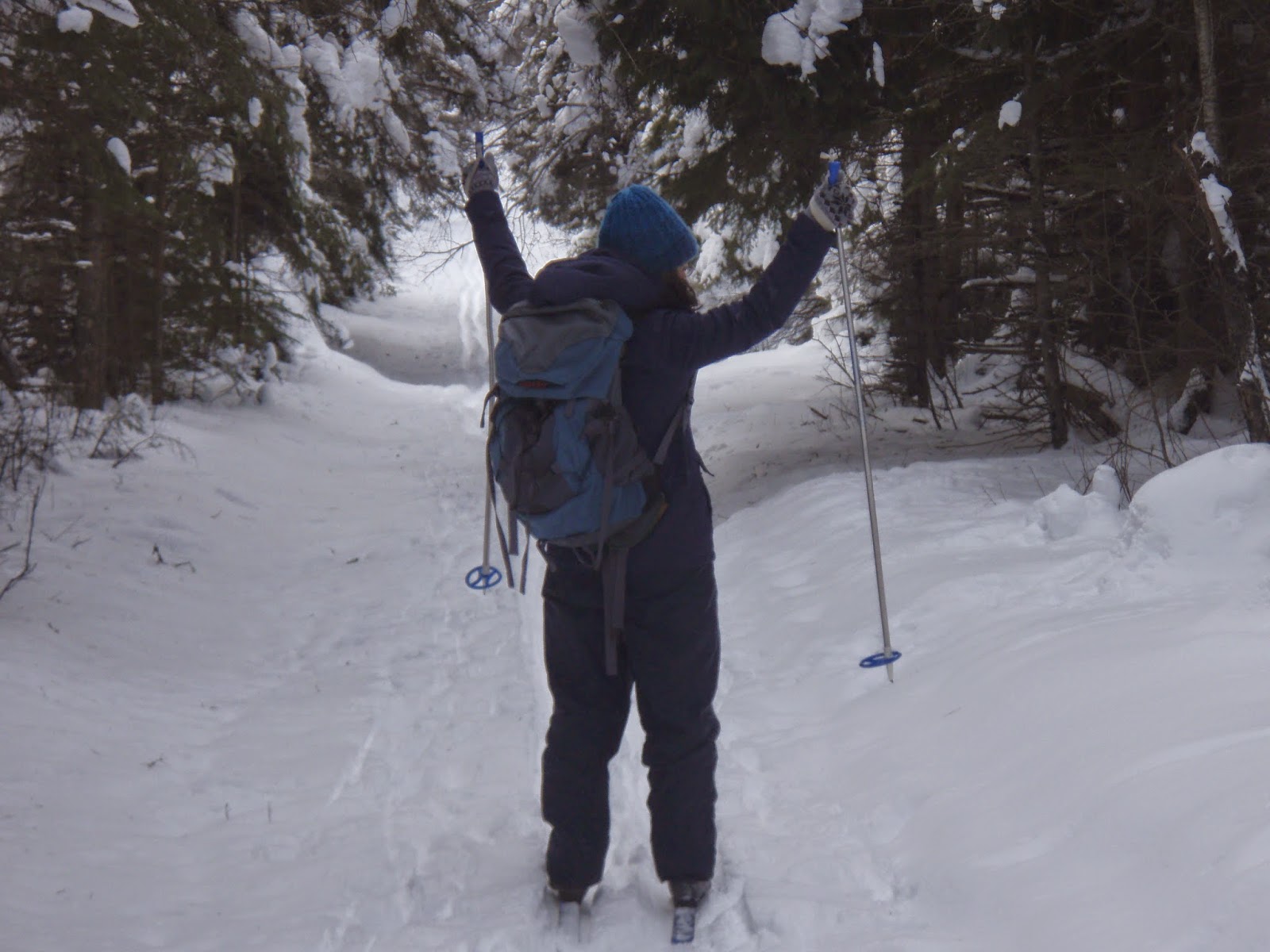 Next another nap and snack (I could get used to this living style! Hey we worked hard- snowshoeing and skiing for around three hours each is nothing to sneeze at), and then we stuck around playing ping pong and other games. So relaxed and fun, it was a great way to bond with our now special friends. 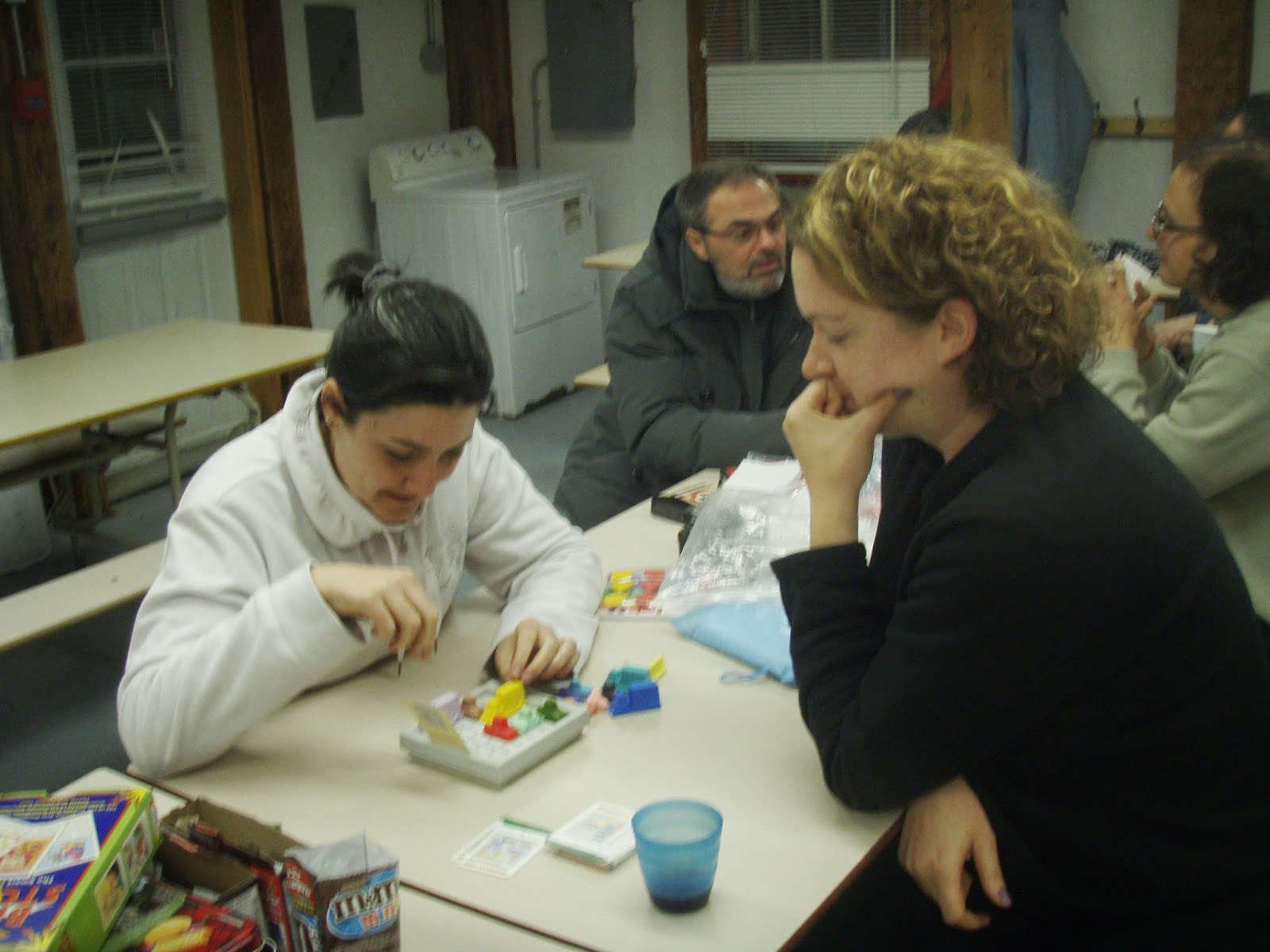 Supper was a relaxed meal of fajitas, salad and the most incredible chocolate fondue brownies you’ve ever eaten. And just when we’re all fat and happy and ready to turn in, Adrienne whips out a genuine Hawaiian (she doesn’t do anything in halves) ukulele and rounds people up for a sing-a-long- I kid you not. So we all sang goodies if not oldies tunes such as ‘Yesterday’, Leonard Cohen’s ‘Halleluyah’, and the Beatles’ infamous ‘Hey Jud’, to the lesser known but still loved ‘Mr. Sandman’ and slightly unconventional (but catchy!) ‘What Do You Do With a Drunken Sailor’. Though we were getting sleepy, we decided to push it and take a midnight hike- and so glad we did! The skies were incredibly black and clear, peppered with bright stars, and it was an unbelievable experience relying on your senses when walking in the nearly completely dark forests. Such a magical and incredible experience, this truly was one the most memorable parts of the weekend. 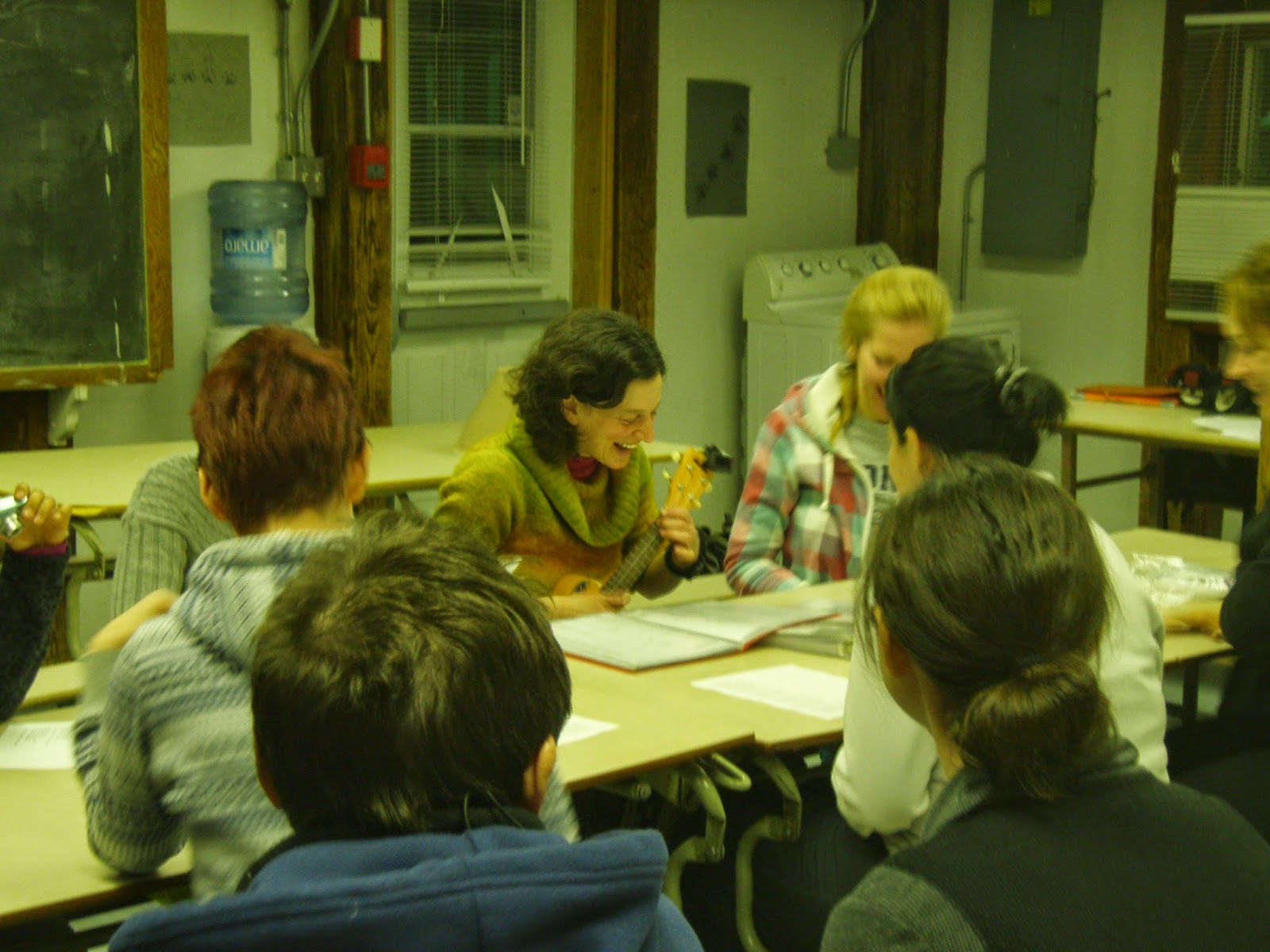 Sunday was a really frigidly clear day but off we went skiing and snowshoeing after another great breakfast (I could get used to this life). This time, we climbed up a massive mountain we can clambered down the day before- that was really something else, what an amazing adventure to be spending outdoors. Frozen butts, frigid fingers, and snow in our hair – nothing stopped us- but icy eyelashes? That’s a new one even for me, and if that doesn’t demonstrate ruggedness, I don’t know what would. 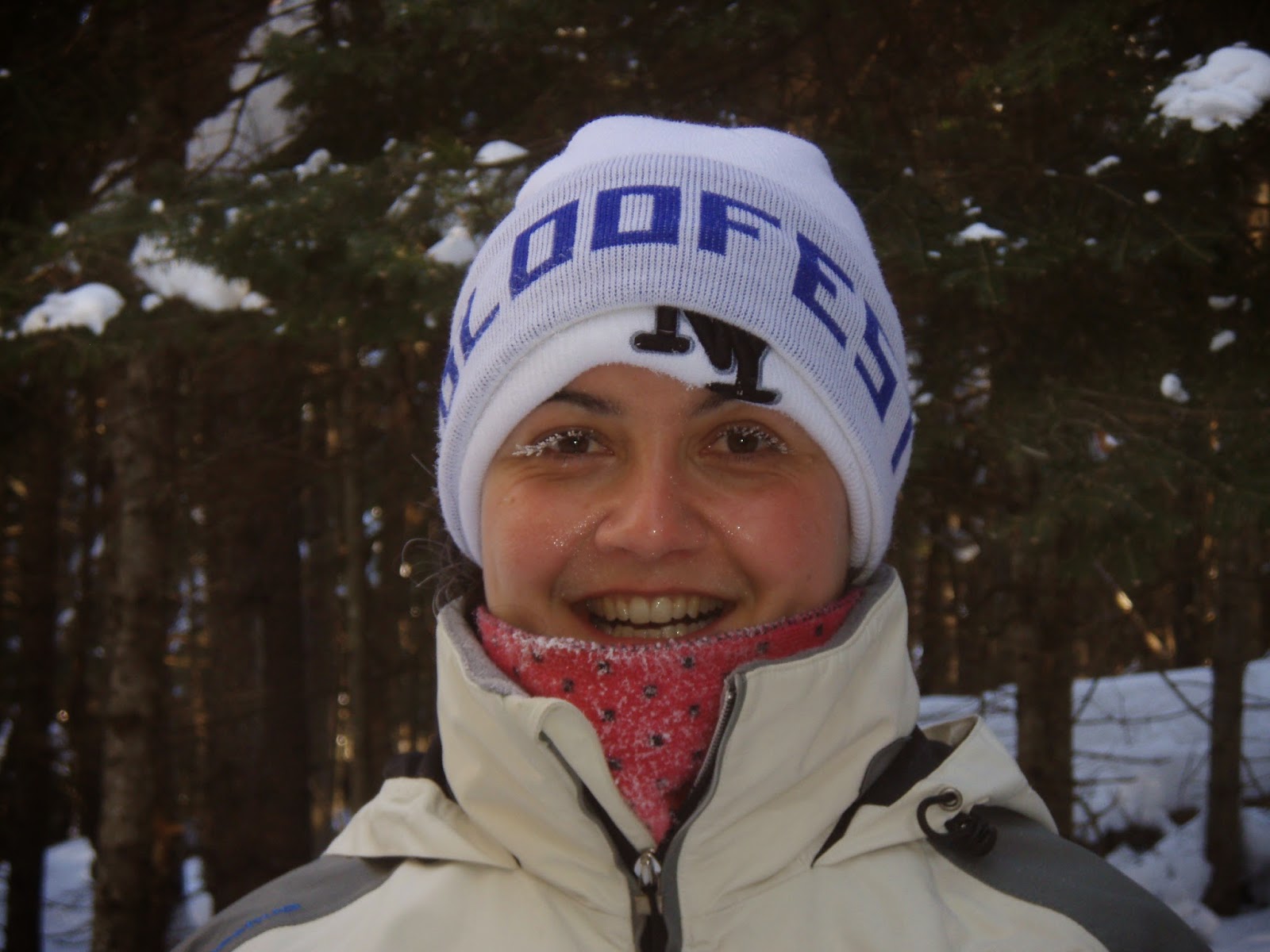 We then went back for lunch, and then some incredibly special people led by Adrienne dared to bake a birthday cake for my sis and I- not too sure who blabbed (and I will find out), but what an incredibly meaningful way of celebrating our birthday with people who had become so special to us- I mean who does that? 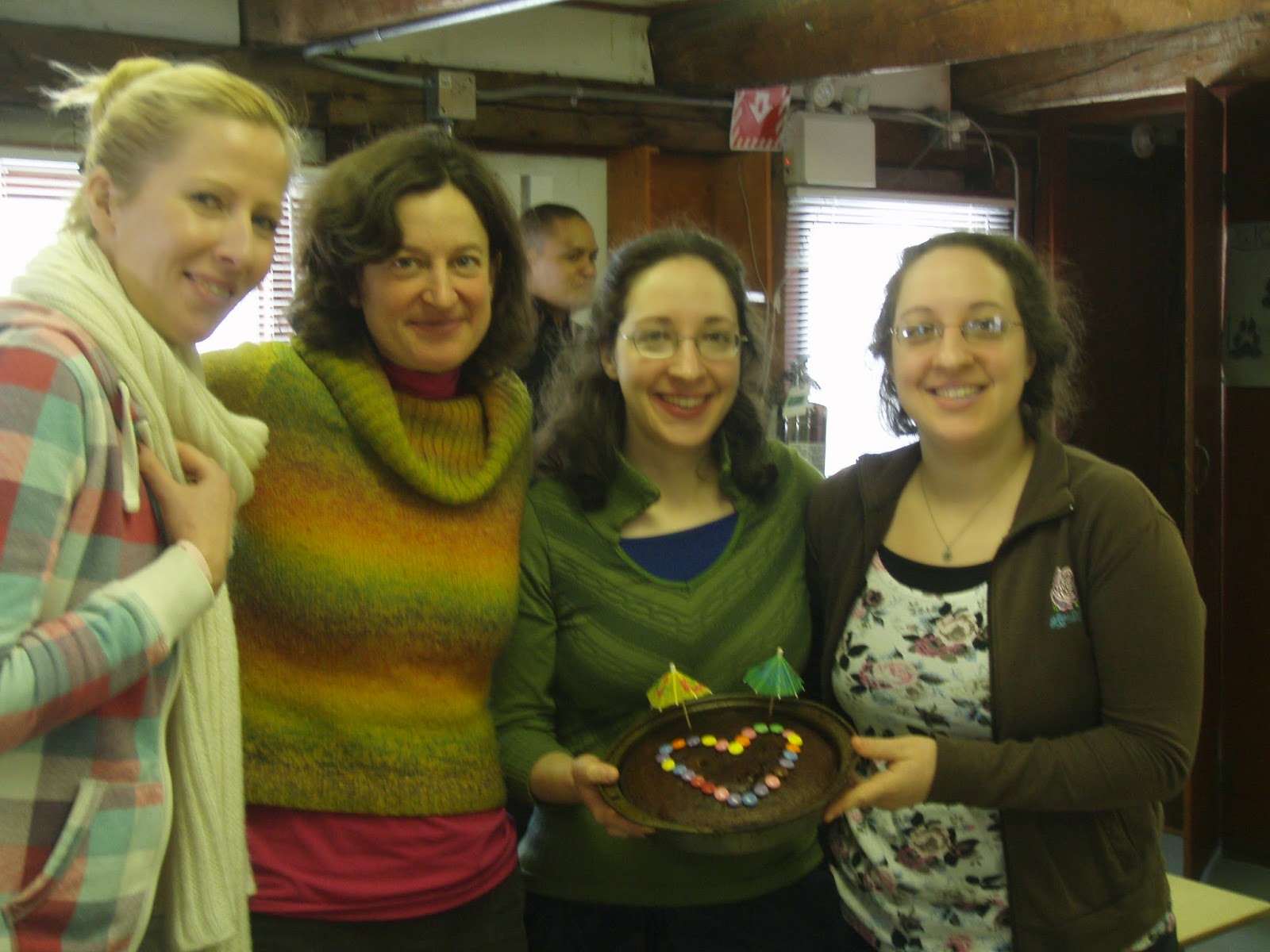 What a memorable weekend it was! A great time was had by all and we have so much to thank Adrienne, Fred and our incredible team for.
(p.s oh and did I mention the bear sighting? No? Guess that’s a story for another time… ;D) 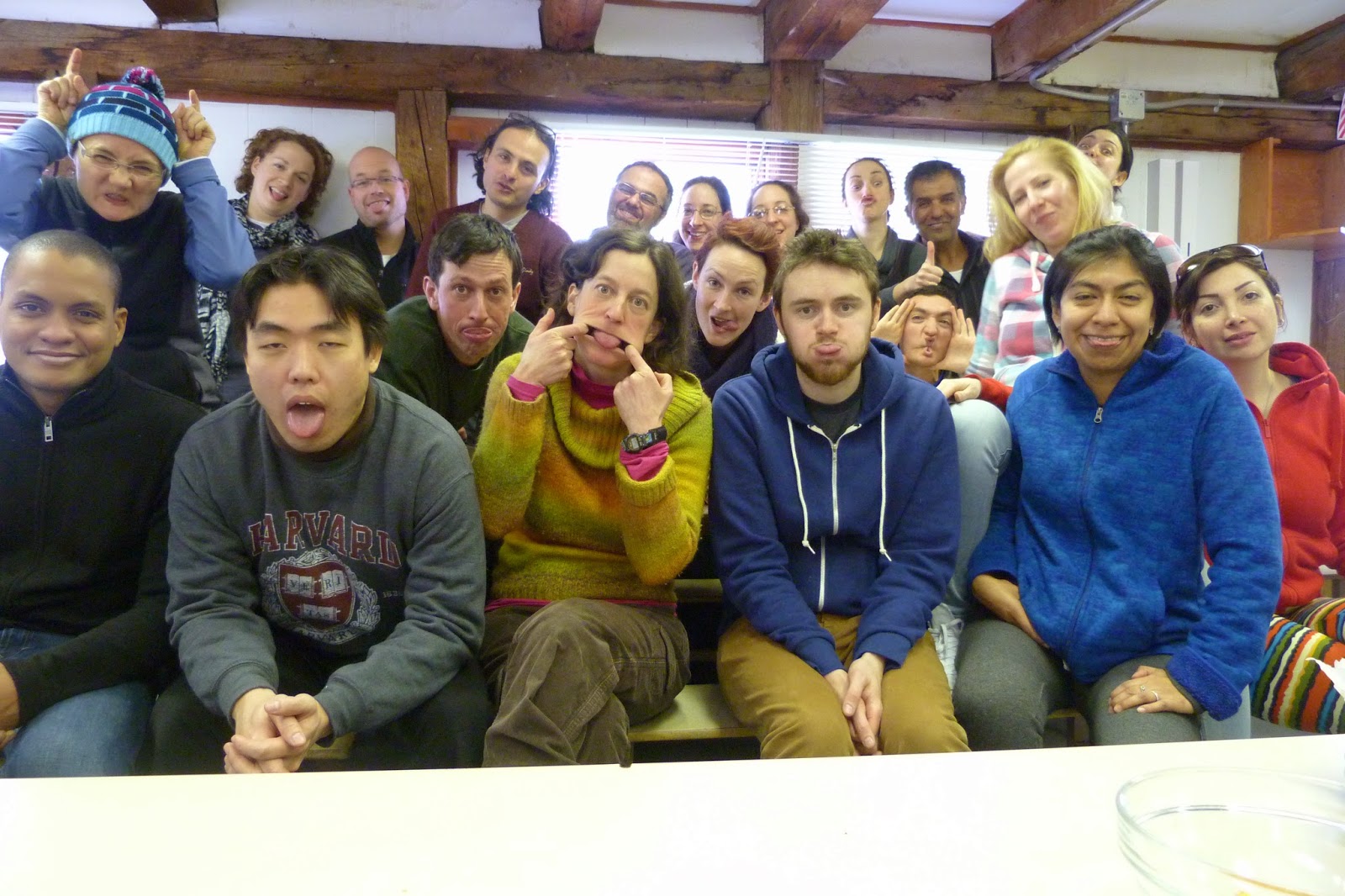