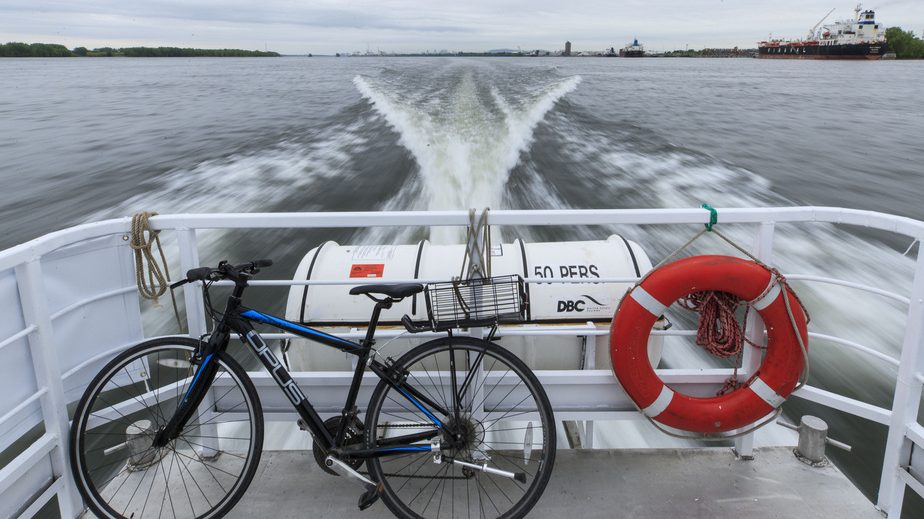 This summer, I took advantage of the new, frequent ferry (‘navette
fluviale’) running from the Old Port out to Pointe-aux-Trembles to explore the
eastern tip of our island by bike.

This ferry is a pilot-project in 2019 run by Navark. Frequent ferries depart every day of the week from the Jacques Cartier Quay and arrive at 2 Boulevard St-Jean-Baptiste in Pointe-Aux-Trembles.

While waiting for the ferry on a Sunday morning, I had the chance to observe many adorable swallow nests under the ramps, with many swallow parents swooping in to feed their young. The ferry ride itself took 30 minutes, cost $3.50 plus $1 for my bike, and gave me some new views of the industrial port and the St. Lawrence. I was actually the only passenger because I was on the very first ferry of the day!

I was able to bike out to the Bout-de-l’île park in about one hour. Soon after starting my ride, I took note of a practical swimming pool stop right along the bike path: Piscine et patageoire St-Georges, located at 13050 Prince Albert street. And not far after that, several signs announced an eclectic icecream (and bathroom) stop at the level of Notre-Dame Park and School. I departed slightly from the official bike path to extend my ride along Terrace and Bellerive streets, which was well worth it as this waterfront was especially pleasant. I also passed near the Plage de l’est, at 16240 rue Bureau, a public beach to be opened in future years.

I pedalled a bit further beyond Bout-de-l’île Park, crossing the Pont Le Gardeur. It was worth it to cross this bridge; I saw an egret flying overhead, mixing waters and strange currents as the Rivière des Mille-Iles joined the St. Lawrence, and a fishing beach on the other side. Once I arrived on the other side, the bike path was still present, but it was a less pleasant area for biking.

Overall, it was a great bike outing. Many other longer loops
are likely possible, incorporating Pointe-aux-Prairies Nature Park, for
example. This new ferry definitely opens up some new biking possibilities.

This site uses Akismet to reduce spam. Learn how your comment data is processed.